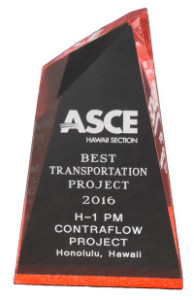 As part of the State of Hawaii Department of Transportation’s (HDOT) efforts to improve Oahu’s traffic congestion, Hawaiian Dredging Construction-Wilson Okamoto Corporation (HDCC-WOC) was selected as the Design-Build (D-B) team for the H-1 PM Contraflow Project.  The project’s objective was to increase the capacity of the H-1 Freeway for westbound commuters from Radford Drive Overpass to Waiawa (H-1/H-2 merge), a six mile corridor, during afternoon peak traffic period.  Overall, the project adds a full lane of capacity for afternoon traffic from Halawa to Waikele.

Construction commenced in June 2012 and was completed October 2015 at a cost of $82 million.